Summer Reading Program: Nickel and Dimed, On (Not) Getting by in America

Nickel and Dimed, On (Not) Getting By In America, by Barbara Ehrenreich 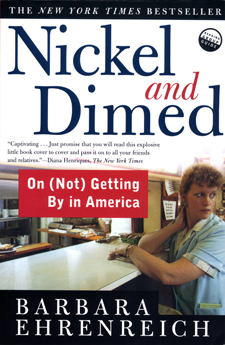 Copies of Nickel and Dimed... as well as other books and articles by B. Ehrenreich are available at VCU Libraries.

From Publishers Weekly:
"In contrast to recent books by Michael Lewis and Dinesh D'Souza that explore the lives and psyches of the New Economy's millionares, Ehrenreich (Fear of Falling: The Inner Life of the Middle Class, etc.) turns her gimlet eye on the view from the workforce's bottom rung. Determined to find out how anyone could make ends meet on $7 an hour, she left behind her middle class life as a journalist except for $1000 in start-up funds, a car and her laptop computer to try to sustain herself as a low-skilled worker for a month at a time. In 1999 and 2000, Ehrenreich worked as a waitress in Key West, Fla., as a cleaning woman and a nursing home aide in Portland, Maine, and in a Wal-Mart in Minneapolis, Minn. During the application process, she faced routine drug tests and spurious "personality tests"; once on the job, she endured constant surveillance and numbing harangues over infractions like serving a second roll and butter. Beset by transportation costs and high rents, she learned the tricks of the trade from her co-workers, some of whom sleep in their cars, and many of whom work when they're vexed by arthritis, back pain or worse, yet still manage small gestures of kindness. Despite the advantages of her race, education, good health and lack of children, Ehrenreich's income barely covered her month's expenses in only one instance, when she worked seven days a week at two jobs (one of which provided free meals) during the off-season in a vacation town. Delivering a fast read that's both sobering and sassy, she gives readers pause about those caught in the economy's undertow, even in good times."