Copies of Radioactive... are available on Reserve at Cabell Library on the Monroe Park Campus. Stop by the first floor service desk. 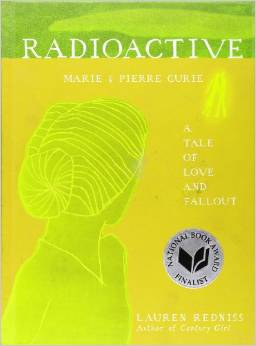 In 1891, 24-year-old Marie Sklodowska moved from Warsaw to Paris, where she found work in the laboratory of Pierre Curie, a scientist engaged in research on heat and magnetism. They fell in love. They took their honeymoon on bicycles. They expanded the periodic table, discovering two new elements with startling properties, radium and polonium. They recognized radioactivity as an atomic property, heralding the dawn of a new scientific era. They won the Nobel Prize. Newspapers mythologized the couple's romance, beginning articles on the Curies with "Once upon a time . . . " Then, in 1906, Pierre was killed in a freak accident. Marie continued their work alone. She won a second Nobel Prize in 1911, and fell in love again, this time with the married physicist Paul Langevin. Scandal ensued. Duels were fought.

In the century since the Curies began their work, we've struggled with nuclear weapons proliferation, debated the role of radiation in medical treatment, and pondered nuclear energy as a solution to climate change. In Radioactive, Lauren Redniss links these contentious questions to a love story in 19th Century Paris.

Radioactive draws on Redniss's original reporting in Asia, Europe and the United States, her interviews with scientists, engineers, weapons specialists, atomic bomb survivors, and Marie and Pierre Curie's own granddaughter.

Whether young or old, scientific novice or expert, no one will fail to be moved by Lauren Redniss's eerie and wondrous evocation of one of history's most intriguing figures