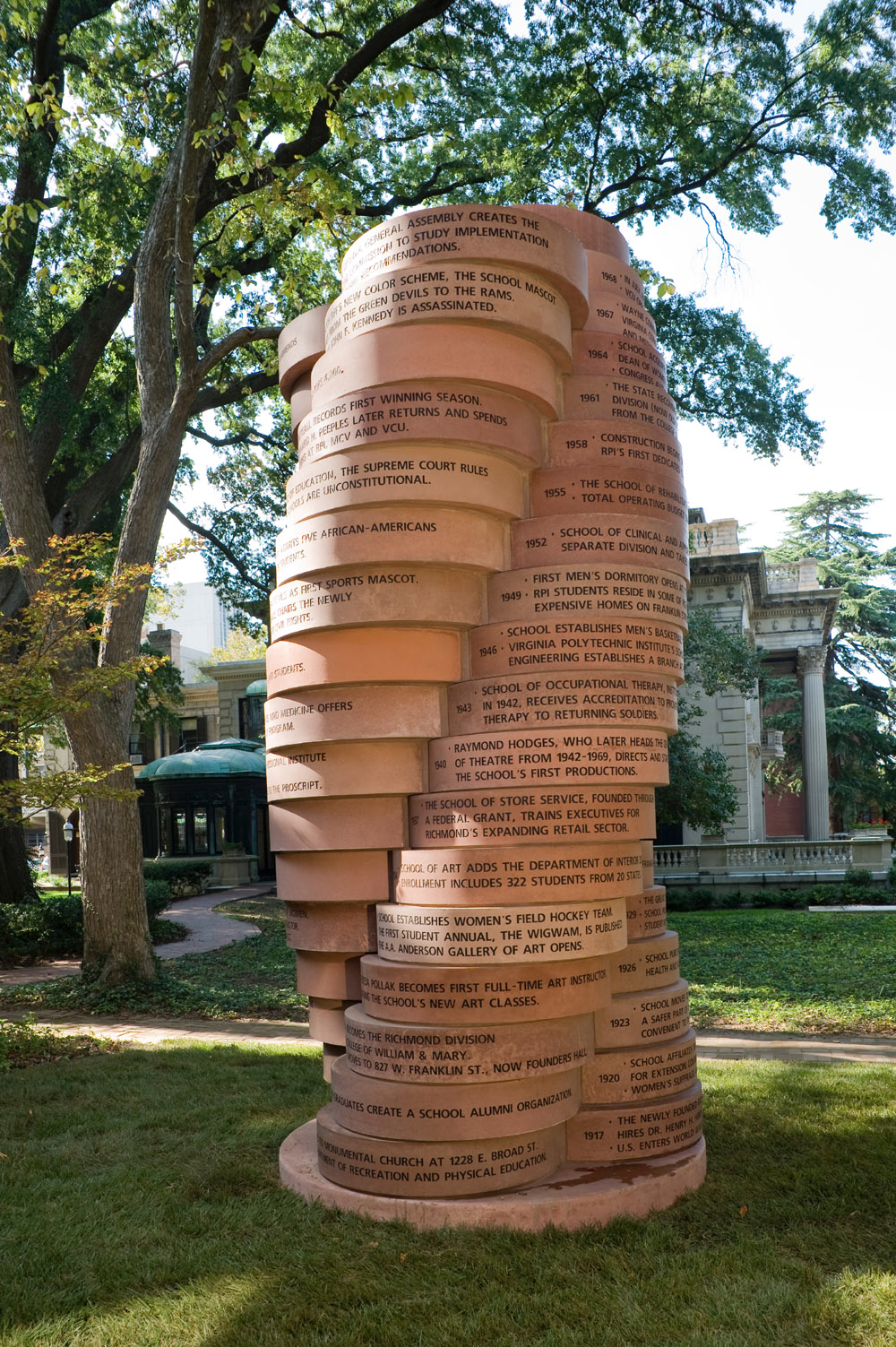 “Tableith” was created to honor Richmond Professional Institute (RPI) in 2008 for the 40th anniversary celebration of VCU. The sculpture weighs more than 20 tons and includes 51 cast disks stacked atop each other and spiraling upward. Each of the disks is inscribed with historical information or key events from the years 1917 to 1968 when RPI merged with the Medical College of Virginia to form VCU. More about the sculpture here. 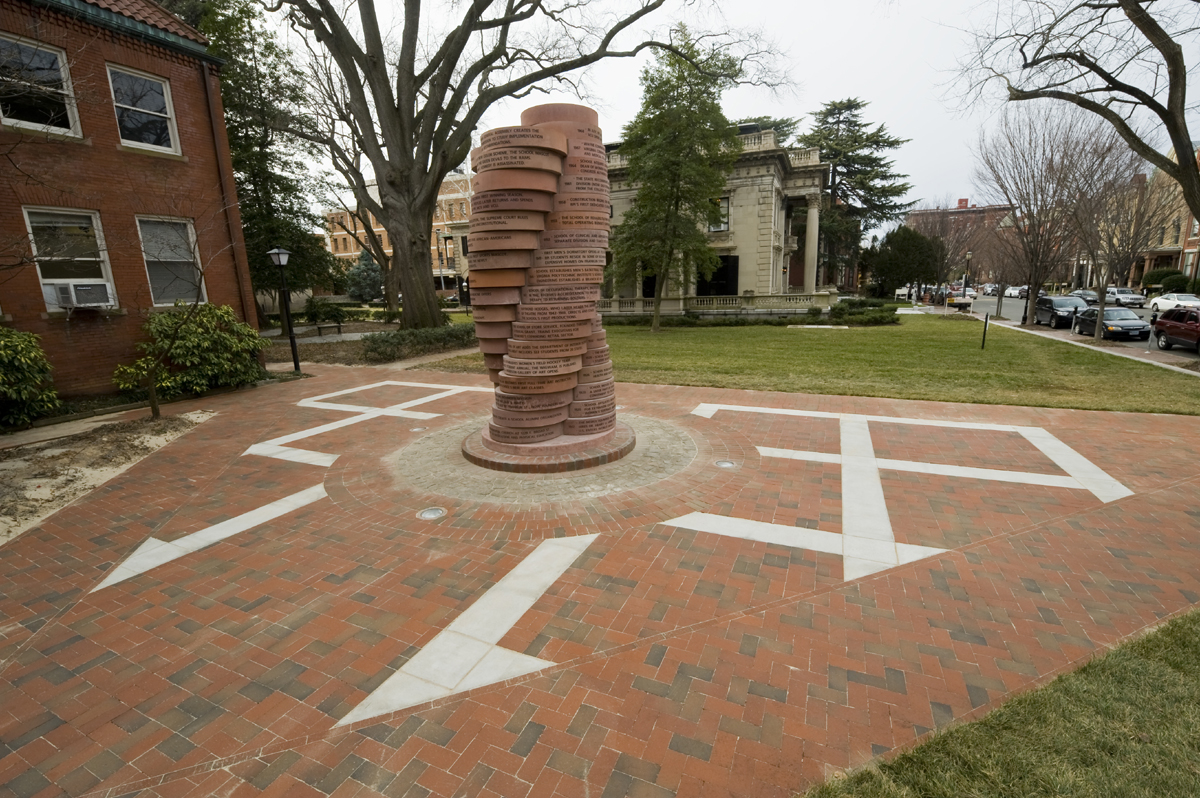 (The “Tableith” timeline is a shortened version of the timeline below.)

1917 - Founded as the Richmond School of Social Economy. Dr. Henry H. Hibbs, Jr. was hired in June of 1917 as Director. Dr. Hibbs was born Nov. 25, 1887 in Smithland, Kentucky and died April 4, 1977, Lexington, Virginia. Hibbs would lead the school until his retirement in 1959. The school opens with seven students in social work and 23 in public health nursing at 1112 Capitol St. (in Capitol Square), sharing a city-owned building with the Richmond Courts.

1918 - The name of the school changed to the Richmond School of Social Work and Public Health.  Public Health program added as part of the war effort.

1919 - The school moves to the vestry of the Monumental Church at 1228 East Broad Street, currently part of the MCV campus. Department of Recreation and Physical Education added.

1920 - Begins first affiliation with College of William and Mary for extension courses.

1921 - Courses in the Study of Dramatic Arts added to Recreation and Community Work curriculum.

1923 - Moves to 17 North Fifth Street, considered a safer part of town for night students and convenient to the Richmond YWCA facilities which are across the street.

1924 - College of William and Mary offers to operate the school as an extension of the college. 46 full time students; 46 in extension courses.

1925 - Becomes the Richmond Division of the College of William and Mary. Moves to 827 W. Franklin Street, now Founder's Hall. Enrollment is 52 full-time and 393 part-time students.

1931 - Women's field hockey team established. The Anderson Gallery opens in the Ginter House converted stables. In a few years it would become the school's library. After the library moved to the James Branch Cabell Library in 1970, a new Anderson Gallery opened up again. The Wigwam, the student yearbook, first published.

1934 - The Department of Interior Decoration added to School of Art. 322 students enrolled from 20 states.

1937 - The School of Store Service Education program founded through a federal grant to train executives for Richmond's large and expanding retail sector. The program becomes the School of Business in 1946.

1942 - Clinical and Applied Psychology program offered in School for Technicians in Science and Medicine.

1943 - School of Occupational Therapy, instituted in 1942, accredited to provide therapy to returning soldiers.

1948 - RPI students select the Green Devils to be the first sports mascot in a vote.  Commission for Civil Rights organized in Richmond with RPI professor Howard Davis as chair. Enrollment exceeds 1500 from 32 states and 4 countries.

1950 - Journalism program established through classes offered by the School of Applied Sciences, Department of English, and the School of Business. Ed Allen hired to be RPI's first full-time Athletic Director, basketball, and baseball coach.

1951 - Five African American students admitted full-time as Graduate students to the School of Social Work. Integration at RPI was not consistent. In 1954, Dr. Grace Harris (later Provost of VCU) was denied admission to the graduate School of Social Work. After attending school in Boston, she later finished her MSW at RPI, graduating in 1960. "The New Gym" at 800  W. Franklin St. is the first new building constructed entirely with state funding on campus.

1952 - Mary Eugenia Kapp (1909-1983) leaves DuPont to become the first Chair of the School of Applied Sciences. School of Clinical and Applied Psychology organized as a separate division and given title of profession school.

1953 - Southern Association of Colleges accredits RPI as an entity independent from W&M.

1956 - Student yearbook renamed The Cobblestone (it had been The Wigwam).

1962 - RPI separates from College of William and Mary and begins operation as an independent state institution. School colors are changed to blue and grey on the recommendation of the School of Art faculty, evoking Richmond as a combination of North and South.

1963 - Since the school team name "Green Devils" did not match RPI's new color scheme, the school mascot changes to "The Rams."

1965 - The School of Arts and Sciences is established. The state's Higher Education Study Commission recommends formation of an urban university in Richmond.

1966 - Wayne Commission is created by Virginia General Assembly to study implementation of the 1965 Commission recommendations.

1968 - On July 1, 1968, Richmond Professional Institute and the Medical College of Virginia officially become Virginia Commonwealth University. VCU opens with an enrollment of more than 10,000 students.