How to use the Comic Arts Collection for research. 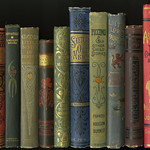 If you have a question
or would like to schedule an appointment, class, or research consultation, contact us at

This guide provides an overview of how to locate and use items in the VCU Comic Arts Collection.

The VCU Libraries’ Comic Arts Collection began in the 1970s with the donation of a modest comic book collection and the papers of a noted Richmond newspaper editorial cartoonist.  The collection then grew with the help of numerous donors over the years – especially that of Dr. M. Thomas Inge, an expert on the history of popular culture and the comic arts.

Today, the collection includes thousands of comic books dating primarily from the 1960s through today (though we have many before 1960 as well); the papers and drawings of political cartoonist Fred O. Seibel and Charles Henry "Bill" Sykes; Billy De Beck's personal library and the door to his studio apartment, featuring an original painting of his famous characters Barney Google and Sparkplug; a number of set design paintings from the 1960s Batman television show and movie; an extensive collection of fanzines; and many other materials. In addition, VCU Libraries has been the repository for the Will Eisner Comic Industry Awards Archives since 2005.

What is Comic Art?

Comic Art, also referred to as sequential art or graphic storytelling, is a form of visual art that combines images with text, most often in the form of a word balloon.