City directories can be excellent resources of information: When was a building first constructed? Who lived there? Early directories even noted a person's occupation and race. Special Collections and Archives houses Richmond city directories for the following years:

Undergraduate Student Reports -- Copies of undergraduate student reports on specific buildings (many of them historic buildings owned by VCU) in Richmond are housed in Special Collections and Archives. These reports, compiled by students of Dr. Buie Harwood, former chair of VCU's Interior Design Department, include images of the building being studied, its history, information about the building patron and architect, a discussion of its architectural features, and other information. Just ask a staff member to access this collection. 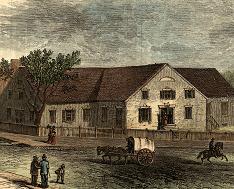 The collection focuses primarily on Richmond and is made up of nearly 300 prints from 19th century periodicals, including Harper's Weekly and Frank Leslie's Illustrated Newspaper, and over 100 maps as well as other miscellaneous items. Topics range from images of daily life and of African Americans to Richmond architecture and miscellaneous city views.

A large number of items in the Prints Collection have been digitally scanned and are available at this site: Richmond Nineteenth-Century Print Collection. 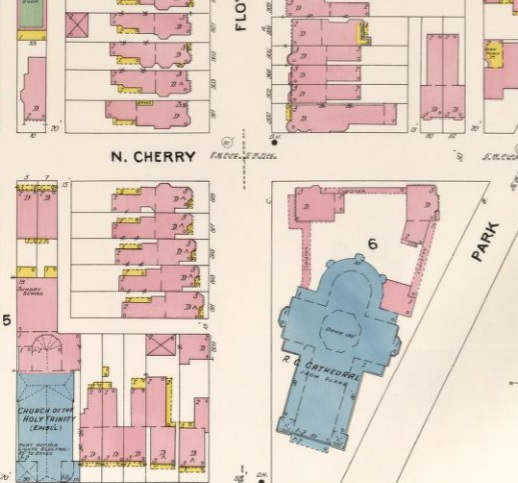 Image from the 1905 edition of the Richmond Sanborn Map showing the corner of N. Cherry and Floyd Ave.

Sanborn Fire Insurance Maps from the Sanborn Map Company Archives, late 19th century to 1989 for Virginia, are available on microfilm on the third floor of the library AND online to researchers in the VCU Libraries. There is an online version of the 1905 Sanborn Map at the Library of Congress - access that HERE. Other libraries in Richmond have original Sanborn maps that can be viewed on site.

Other important journals held by Special Collections and Archives:

Richmond Magazine - There was an early version of Richmond Magazine published by the Richmond Chamber of Commerce [it began in 1914] and in their first decade or two, they listed buildings being built and their contractors. Special Collections and Archives has nearly 20 issues. The Library of Virginia has a complete run.

Architects and Builders Journal - was published from July of 1899 until September of 1908 in Baltimore but included building information on Richmond and Virginia. The Library of Virginia has the journal on microflim.

Manufacturers' Record - the journal began in 1881, published in Baltimore. Like the Architects and Builders Journal it included information on buildings being built in Richmond and Virginia (as swell as five other states). By the later 1890s, residential projects were listed in the journal and information included the names of the client, architect, and contractor and contractor price. The Library of Virginia has the journal in its holdings.